I HAD never gone up Cape Rachado (or Tanjung Tuan), Port Dickson, to view its famous lighthouse despite having passed by its vicinity every drive down to Melaka using the coastal trunk road.

This time, I decided to drop by as it happened to be the site for the annual Raptor Watch that takes place on its grounds. The lighthouse is believed to be the oldest lighthouse in Malaysia, said to be built in 1863 after the original was destroyed in a war between the Portuguese and the Dutch in the 16th century. The structure is made of masonry and whitewashed. The second tower, which houses a Measat radar, is made of concrete and was built in 1990.

Parameswara, the founder of Melaka, and its first sultan, is believed to be buried in the area. Visitors are allowed only up to the compound but not into the premises of the lighthouse.

The 800m road leading to the lighthouse is well tarred, and flanked on both sides by the original flora of this coastal rainforest. The presence of giant trees like the mata keli (Gynotroches axilliaris), mengkulang (Heritiera simplicifolia), and meranti tembaga (Shorea leprosula) provide a cool respite even on hot afternoons Living under the shade of these trees are a diverse fauna population, including over 50 species of indigenous birds, as well as primates such as macaques and the rarely spotted silver leaf monkey.

During Raptor Watch Week, which takes places in mid-March every year, bird lovers and ornithologists zoom into Tanjung Tuan to catch sight of thousands of birds of prey as they ride the thermals to cross the Straits of Malacca from Indonesia on their return migratory leg.

When I was there to do a painting of this structure, I met several bird watchers armed with binoculars and long-range cameras. They were perched along the lighthouse's perimeter wall keeping a lookout for the raptors. The previous day, one of them told me over 2,000 raptors had been spotted. As we were talking, another chap alerted us to two Chinese Sparrowhawks which were coming in from the seas.

There are several other attractions in area. About 100m from the lighthouse, on the left side of the road, a concrete-stepped trail leads to the beach where an abandoned Dutch well, a piece of rock dubbed the footprint of Hang Tuah, and a Perigi Keramat or "mystical well" are located.

Unfortunately, I did not manage to get down to the beach because of a sprained ankle sustained halfway through the trail. There is another jungle trail that leads to a rocky outcrop known as Batu Puteh but this one has been closed due to safety concerns. There is another stepped trail just beside the lighthouse that one can explore. 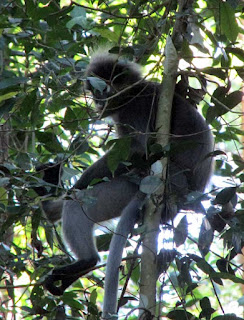 On my way down from the lighthouse, a chance encounter with a park sweeper revealed an interesting side to Tanjung Tuan. According to the man, in the days of old, the jungles surrounding the lighthouse were considered "magical".

"When I was young, my parents told me and my siblings that the area is inhabited by invisible beings known as `orang bunian'. These beings rarely disturb humans but sometimes, if they are offended by mischievous visitors, they would make their presence felt. When they cross paths with humans by chance, they would transform into creatures of the jungle to hide their identities.

"I also remember tales of a huge white crocodile that inhabit the waters off the coast and which had been spotted sunning on the rocks. That crocodile is believed to be a 'keramat' (a mystical guardian) of the coastline," he said.

Visitors to the lighthouse are charged RM1 at the foot of the hill. The best times to visit is during weekdays. The road leading to the lighthouse is clean but the incline can be challenging if you are not fit. There are several rest huts for you to catch your breath.

RAPTOR Watch began with a group of birdwatchers who were enjoying the sight of raptors making their annual trip across the straits off Tanjung Tuan during their migratory season. When they heard of plans to develop parts of the Tanjung Tuan Forest Reserve, they realised that the survival of the raptors would be jeopardised as it depends on the preservation of the coastal rainforest.

Efforts to raise awareness on Tanjung Tuan as a prominent bird migratory site led to the organisation of the first Raptor Watch in 2000, with two small tents set up by volunteers from the Malaysian Nature Society.

Two nature guides were also roped in on the spur of the moment to take people through the jungle trails to learn more about the flora and fauna of Tanjung Tuan.

Raptor Watch has not only brought people, nature and birds together but it had also led to the conservation of Tanjung Tuan's coastal rainforest and turned it into an ecotourism attraction.

The annual event has put Tanjung Tuan on the map for birdwatchers and nature lovers around the world, so much so that the cape has now been recognised as an important raptor site by BirdLife International, National Geographic and Hawk Mountain Raptor Sanctuary.
Posted by ES Tung at 6:00 PM