Labour of love than spanned the decades

THIS is probably one of the oldest bamboo grove in the Perdana Botanical Garden. There are two clumps actually, if viewed at an angle of 90 degrees to where this was painted. In fact, this is one of the features of this public park that has not changed over the last three decades.
In the 1970s, when I was still in my teens, I used to visit the Lake Gardens (as it was then known) during the school holidays.
This was because in those days, there were few such places that has several attractions within walking distance of each other. It was also one of those places accessible by public transport.
Those days, there was only a clump of bamboo trees on the circular man-made island. At the time, this lake was known as Sydney Lake.
According to G.M. Gullick (Kuala Lumpur, 1880-1895), the parkland was originally a valley of secondary forest irrigated by Sungai Bras-Bras. 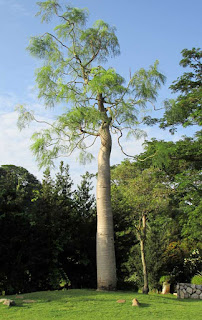 Then, Selangor State Treasurer A.R. Venning had proposed to Swettenham that a botanical park be built in the roughly 173-acre land.
Venning’s labour of love spanned 10 years and sparked public interest and received support.
Cantonese community leader Chow Ah Yeok was said to have contributed 100 white cempaka and orange trees to the project in 1888. A contractor named Gordon was engaged to dam the river and turn the lower part of the valley into a lake.
On May 13, 1889, Governor of the Straits Settlements Sir Cecil Clementi Smith declared open the Lake Gardens. Mrs Swettenham was given the honour to cut the ribbon and the lake was named Sydney Lake, after her maiden name.
However, the original man-made lake was short-lived. Two years after the opening, the bund that held the man-made lake collapsed and had to be reconstructed.
In 1975, the Lake Gardens was renamed Taman Tasik Perdana, (Perdana Lake Gardens) by then Prime Minister Tun Abdul Razak. The lake became known as Tasik Perdana. Boat rowing facilities were also introduced after the re-launching ceremony on March 1, 1975, starting with colourful oar-powered skiffs, and later pedal-boats.
The fee back then was one ringgit for an hour’s spin around the lake. On popular days such as weekends and public holidays, long queues could be seen waiting for a ride. 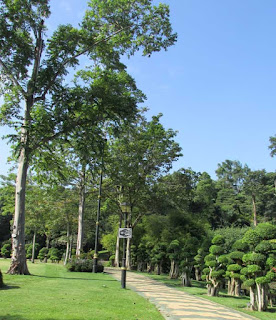 The Perdana Lake Gardens was again renamed the Perdana Botanical Gardens on June 28, 2011 by Prime Minister Datuk Seri Najib Tun Razak.
Over the few years, many other botanical attractions have been added to enhance this tourist attraction. They included sections containing indigenous fruit trees, local herbs and even a garden dedicated to the ginger family.
Much care has been taken of the lake as well, as seen during my recent trip there. Several aerators are placed at the lower end of this lake, which holds a few common species of local fish, to increase its oxygen level. There’s also a boat mounted with a cleaning sieve in front that was used to clean up the flotsam of broken twigs and leaves.
According to the signages, a huge part of the park is also a WiFi zone.
On the island, under the bamboo grove, I spotted a family of local ducks preening in the sun. I was told by a park worker that they were released by the council.
However, I also spotted a couple of what I thought to be crows flying out of the bamboo grove until they swooped down to forage by a small drain about a 100 metres away.
Imagine my surprise when my camera’s zoom lenses revealed the identities of the birds which I later found out to be a species of ibis, possibly Hadeda ibis, which is not indigenous. I was even more surprised when I called the park office to find out about these birds. Apparently these birds were not local nor were they released by the park authority.

PORT Klang's Hailam Choon (or Hainanese Village in Hokkien) is a century-old riverine village at the North Port of Klang. Known locally as Bagan Hailam, this village comprising cluster of wooden houses built on stilts and linked by concrete walkways, sits on the banks of the Klang Riverover looking the estuary.


Built along the swampland that was once filled with mangrove trees, this village is believed to be set up by the Hainanese immigrants in the 1900s. It used to be accessible only by rowboats from the opposite bank, where the Royal Selangor Yacht club now is. However in the 1980s, with the development of the North Port, tarred roads were built in to the area to cater to the logistical needs of the many industries set up here.

According to a villager in his 60s, who came to watch me capture this tranquil estuary at the back of one of the temples here, Bagan Hailam was a thriving fishing community from the 1960s to the 1980s.

"There were many houses here those days," he lamented. "We have three temples and come each festival to mark the birthday of their resident sages, people would come by the boatloads to pay homage or watch Chinese opera." He pointed out that during its heyday, there were almost 2,000 inhabitants in the village. Bagan Hailam even had its own Chinese primary school, SJKC Wu Teck, set up about a centuryago. The school had since moved to Bukit Tinggi in 2011, leaving an empty shell of the asbestos-roofed timber building as a stark reminder of dwindling populace.

I was told that most families who had made their fortunes during Bagan Hailam's better years had moved on. Some of them had either sold "ancestral homes" or rented these homes to mostly immigrants working in nearby industries. Very few of the descendants of the original families still fish for a living.

"Even the children of those now staying here have moved elsewhere," the man said.

There are several seafood restaurants operating at the back of the houses here, fighting for survival with the bigger eateries that sit along the esplanade. I was told that the prices in Bagan Hailam are quite reasonable.

Along the lower reaches of Bagan Hailam are commercially operated fishing ponds that draw a good crowd of anglers, especially during the weekends. On the other side of Bagan Hailam, along the road fronting the channel, is a recreational esplanade area known as Tanjung Harapan or Cape of Hope. This stretch is very popular with weekenders, particularly recreational anglers who are just happy to wet their lines.

The currents along this stretch can be very strong and unpredictable, an angler friend says. At certain times of the year, the king tide can bring the waves right up to the road, he warned. Perhaps this was why Tanjung Harapan was once known among boatmen as Tanjung Gila, to describe its unpredictable temperament.

BAGAN Hailam was thrown into the limelight on June 20, 1992, when a chemical tanker MV Chong Hong III, caught fire and exploded while discharging xylene at a chemical complex nearby. The incident, which claimed 13 lives, took place about 100m from Bagan Hailam and this had caused a mass evacuation of the villagers. The villagers were relocated temporarily by the authorities in case the fire spread to a fuel depot nearby. However, a number of villagers braved the fiery threat by staying back in the village to guard their homes from potential looters.
Posted by ES Tung at 9:03 PM No comments: