MY attention was drawn to this traditional house by the sparkle of sunlight caught on its orange-coloured roof tiles when I visited the Forest Research Institute of Malaysia (FRIM) in Kepong.

I used to see these tiles, called atap genting singgora (singgora clay tiles), in my home state of Terengganu when I was a child. The morning sun had cast long shadows on the subject, as if calling for it to be painted, and I obliged.

According to a faded information board at the staircase, this traditional Terengganu Malay house originated from Pulau Rusa in Terengganu. When it was dismantled and brought to FRIM in 1987 to be reassembled, it was believed to be already over a century old. It was bought from the original owner for about RM1,500, according to another source.

Made of cengal wood (Neobalanocarpus heimii), this house belonged to the Rumah Tiang Dua-Belas category in which the main structure is supported by 12 timber posts (tiang). Save for a few broken roof tiles, the house still looked quite sturdy. I would have gone in to check it out had I not spotted a pack of wild dogs which sought refuge inside.

A friend of mine told me that this type of house is also known as Rumah Bujang Berselasar, the Terengganu traditional Malay house in its simplest form — with only two areas: the main house area (rumah ibu) and the verandah (selasar or serambi), connected by a small staircase.

Guests are usually received at the verandah, which also serves as a place to relax on a hot day or carry out chores such as making handicraft or teaching children to read during the day.

The roof tiles used in this house are said to be similar to the atap singgora used in Thailand. In fact, the term Singgora refers to a place in old Thailand where roofs are tiled using these. Each tile comes in a long pentagonal shape, with a hooked end on one side. They are made by using the foot, dried in the hot sun, and then fired in a kiln. I believe these tiles are still being made in some remote villages in Kelantan.

To install them on the roof, each tile is hooked onto the rafter and arranged side by side. Each ascending row of tiles sits on top of another on the lower rafter. Each piece is placed to overlap, top over bottom, so as to cover the gaps to prevent rainwater from seeping through.

Singgora tiles are very brittle. Roof-tilers had to be extremely careful of their steps when mounting these tiles on the rafters as they cannot hold the weight of a person. The Singgora tiles are also lighter and porous, and they absorb moisture during the night.

During the day, the moist tiles are able to keep the house cool. Usually, moss will grow on them and add to the cooling property of roofs using these tiles. Of course, for the occupants, the interior of such houses can sometimes be quite damp, especially during wet spells.

Like most traditional Malay houses in Terengganu and the east coast of the peninsula, the timber posts of this house stand on stone piers. The high posts keep pests like ants and snakes from entering the house and the structure free from flood waters. The space beneath the house allows further cooling of the structure. This area is often fully used for storage, sometimes to rear poultry, or even to air-dry clothes during rainy seasons.

The stone piers on which the posts stand prevent dampness from seeping into the wood. They also serve to deter termite attacks. In case of an attempted attack, the termite mud-tubes (trails left by the insect whenever travelling through exposed surface) would have been spotted first before damage is done.

HOW ATTAP SINGGORA IS MADE

CLAY obtained from the river is first processed to the right consistency. It is then slapped onto a slanting wooden mould shaped like a longish pentagon and compressed by using the feet. The depth of the mould gives the tile its thickness. Excess clay is removed by dragging a bow with a wire across the face of the mould.


The Singgora clay roof tiles are believed to be similar to those use by Thai traditional architecture. They are porous and can absorb moisture and cool the house down during the day.
The soft sheet of tile, like plasticine in texture, is then peeled off from the mould and arranged side-by-side on an open ground to be dried under the sun. Here, the hooked end is folded manually, using a small block of wood as a guide to ensure a uniform height.

Once the tiles are sufficiently dried, they are then fired in a kiln, turning their colour from grey to orange-red. 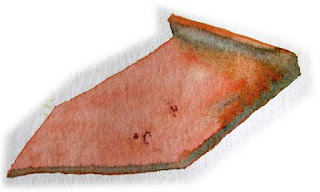 This is the writer’s impression of a single piece of Singgora clay tile turned upside down. The hooked end is folded at right angles so that it can clasp onto the rafter when put in place.