Sending my daughter to her friend's home in Kundang Ulu yesterday took me south to Johor and my wife and I visited Pagoh, Yong Peng, and finally ending up in Kluang. I had been to Kluang before many years ago but had never put up the night there. I remember, the only thing that attracted me to the town, was the famous railway canteen whose nasi lemak, coffee and toast were one of the best in the country.

This time we arrived on Thursday, and unfortunately for me, the canteen was closed. Since I could not do much there, with the station less crowded, I was able to sit and sketch from Platform 2 of this station. This is a major stop for the KTM trains heading to Singapore or the Northern regions. 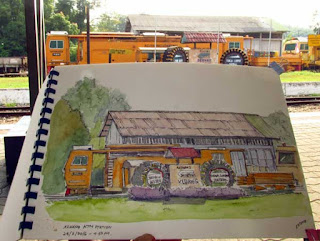 Since the station building was crowded with cars parked haphazardly, I decided to paint the scenery across the tracks, of the location marker and the locomotive-like machine on its tracks. This is actually a Unimat-Compact universal tamping machine by Plasser-Theurer used to maintain railway tracks. It helps to raise the rails, compact the gravel beneath, and levels the rail off mechanically.